Salt cooking a good fish is probably the best way to keep its original taste and flavour. Furthermore, this cooking style (completely covering a piece with cooking salt) has a very interesting advantage, and it is that the cooking time is not (too much) critical; you can keep it warm in its salt coating during some minutes (whilst you finish the starters), and its texture won’t be affected. On the cons, there’s the huge amount of salt you need to cover the full piece and, as it is oven cooked, the energy waste. With this proposal, we resolve both cons keeping, worth to mention, the principle of “non intervention”, ie no disguising the taste of the fish with sauces or complex firings.

The first step is to prepare a cooking salt bed, two fingers thick, in a pan or pot (with lid) in which the fish fits. Unlike when you salt cook the traditional way, in this recipe you can divide the fish (in fact, it is recommended to match the cooking time). Next add the herbs and soak with water, but not too much! Sprinkle it with your fingers, so you don’t dilute the salt, four to five times. You will get some steam during cooking. 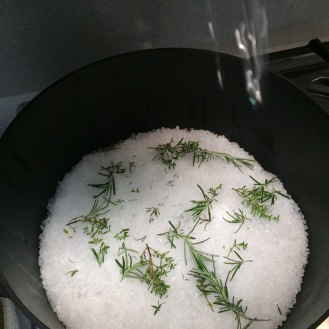 Once the base is ready, put the fish on top, already in the serving portions, fillet to fillet, as if it was closed again. The tail piece will be for our daughters, Carlota and Paula, as it has no thorns, and the upper part for us. Cover the pan and bring it to very strong (maximum) heat for 10 minutes. 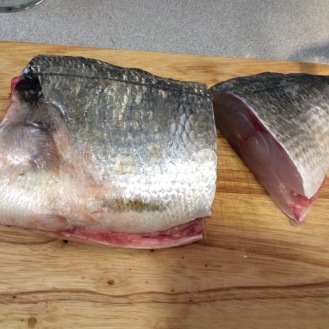 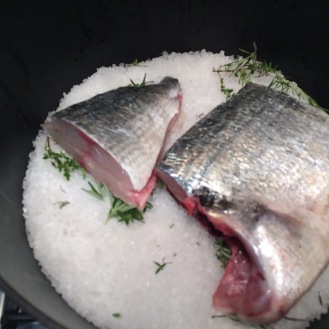 Whilst cooking the fish, prepare the side, today a “concassé” tomato. Peel it (either with a good knife or scald and blanch for one minute), discard the seeds (do not throw, use for a tomato sauce), and dice the fleshy part.

Put the tomate dices in a bowl, season them with salt and olive oil and… ready!

After 10 minutes, take a first look at the fish. Beware of the steam while opening the pan, don’t get burnt! If it is no longer pinky, turn off the heat and leave covered until consuming (do not overdo, 5-10 minutes maximum) 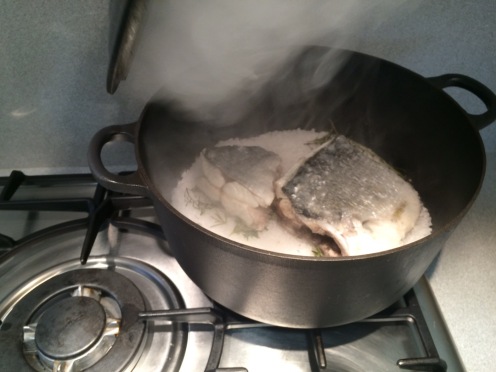 Serving it is not complex. Put a portion on the plate, retire the skin, which goes almost alone, put a tablespoon of tomato, some olive oil drops and… buen provecho! 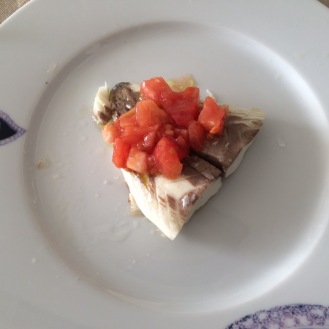 Carlota has even repeated! 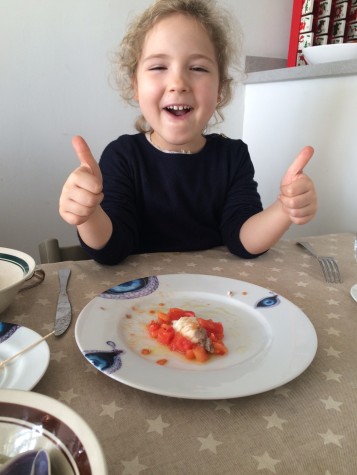